This mini blog post is a stub from my Disney Park Collection Post. Check it out here.

A hugely important aspect of Disney’s legendary theming is music. As you walk into each area of the park, your mind is taken somewhere else. To a certain time period, a location, a country, or an intangible idea. And music helps make that illusion all the more real.

Disney has been hit or miss when it comes to releasing the audio they feature in the parks. Sometimes, it’s unavailable in the “real” world altogether. Other times, they feature some on their sporadic park official soundtrack releases. I have a small collection, but here it is: 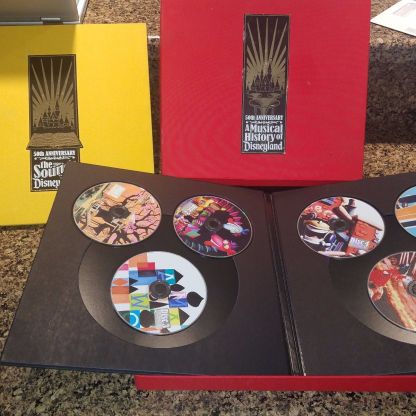 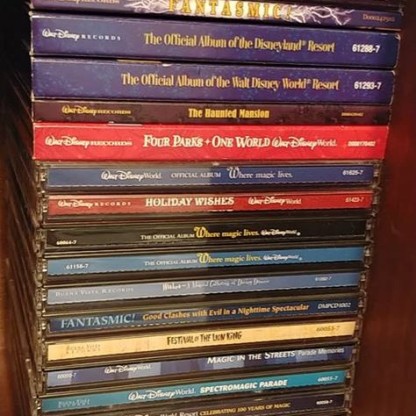 Since I suffer from a tiny bit of OCD, the releases are organized by the date I purchased them, starting at the bottom. The first CD I purchased was the official soundtrack to the “Main Street Electrical Parade”. I saw the parade during my first visit to the park, and I just had to own that infectious song.

Each year, and visit I made to the parks, I would always check and see if there was a new release. There seemed to be no rhyme or reason to the timing, but when they came out, I purchased them. They have a sense of exclusivity to them – you can’t just purchase tracks on iTunes, or through Google. Most times, these tracks are only available on the disc for purchase inside the park.

Frustratingly, but understandably, the official soundtrack is often filled with repeat music and 4-5 new tracks. Of course, collectors and park aficionados like me want all new, but Disney has to appeal to the casual or first time visitor.

Thankfully, there are special releases like the 40th Anniversary Haunted Mansion release which has a new ride-through. Or the Event Party album which features the awesome Happy Hallowishes audio. They also released a standalone album of the now-retired Wishes fireworks show. It holds a special place in my heart because that’s the regular show that played when I worked there during my Disney College Program days. Sigh.

Some of my favorites are the highlights of the “Main Street USA” background music, Soarin’s musical score, Cinderella Castle Medley, Epcot’s Illuminations soundtrack, Space Mountain soundtrack, fireworks and other evening entertainment score… the list goes on, and it just feels good to listen to. Sometimes, my coworkers come by my desk and they give me that look that says “what the hell are you listening to?” as I just smile, bobbing my head happily.

Yes, Disney parks soundtracks are mixed in with the “normal” music I play regularly. Am I weird? Yes. Do I care? No. Weird people are cool.