If you know anything about me, you know that I love Disneyland and Walt Disney World. There are pros and cons to both resorts, and I’ll probably cover those on a blog post someday in the future. One thing both resorts have in common, though, is pin trading. Pin trading is huge. HUGE.

My first visit to Walt Disney World with my family was in the Summer of 2000. Pin trading was heavily promoted as part of Epcot’s Millennium Celebration. Even though there was such a heavy focus, I just didn’t get that into it. I did purchase a pin with my name on it as a souvenir, but the interest stopped there.

Fast forward 3.5 years to when I worked at Walt Disney World as part of the Disney College Program. Living on Disney property with tons of other college-aged cast members, working in the resort making magic for guests daily, and visiting the theme parks as a guest for free was an absolute dream come true. Some of my happiest memories were of working at Walt Disney World. As a cast member, I wore a pin lanyard and traded pins with many guests. (If you didn’t know, any guest can trade a Disney pin for any Disney pin a cast member is wearing on his or her lanyard. Those pins are part of your costume, not your personal collection, and it is a delightful way to spur interaction with guests. ) As a cast member, I was given pins you couldn’t buy, ones that only can be obtained by trading. As a collector, that started the gears in my head turning. I also started noticing the pins guests collected. There wasn’t a huge pattern to it. Some people collected cats, favorite movies, a certain attraction, only Halloween… etc. It was so specific to each person’s personality… and suddenly, on a park visit as a guest, I started purchasing. I was hooked.

I started small. My first “theme” if you will, was the dated year pins. Since this was 2004, I decided to work backward in time (via some Ebay assistance) to obtain pins from every year and visit I had made to WDW.

Starting top left, these are the pins that fall into the date category for all visits to Walt Disney World.

At top left, is my previously mentioned 2000 Brad pin. I located the other 2000 pins, the 100 Years of Magic, and the 2002 pins on Ebay in late 2004. The rest were purchased by me during every visit from that point forward. I also have the 2004 hurricanes cast member exclusive pins (hurricane Charlie hit when I was working there.) Visits from 2006 Disney’s “Happiest Celebration” and “Happiest Homecoming on Earth”, Magic Kingdom’s 40 Years of Magic, and 2012, 2014, 2015, and 2018 visits. I had the distinct pleasure of taking my sister and my nephew Jonah to Walt Disney World earlier this year. I hope I instilled in him some of the wonder, excitement, and passion for Disney that I feel. I even helped him with his first trades.

My collection has since grown far beyond that original theme. 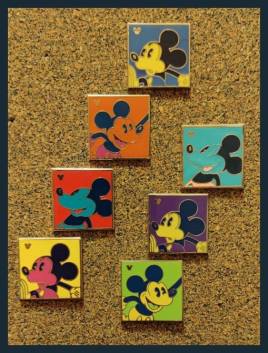 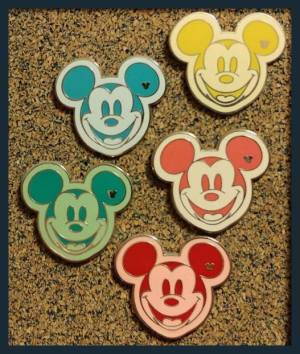 I’m a big fan of collections, and Disney has this down to a science. In the 3 above images, guests can purchase the entire collection from pin stores. But the only way to get the final pin in each series is to find a cast member wearing it and trade for it. That was a challenge I was willing to take, and I worked hard to obtain the complete sets of each series. I love the Warhol inspired set at left, and hope to use it as an artwork inspiration for a tattoo someday.

Jim and I also moved to Los Angeles, and I started visiting Disneyland regularly. I had to complete my plan and purchase or trade for every pin from every year I visited the California counterpart. Here is the much smaller collection of those pins:

And lastly, probably my favorite pins of all are from Epcot (my favorite park!). My sister and I went to Florida together for Epcot’s 30th anniversary in October, 2002. To me, it was a big deal. I was so excited to wait in line to get into Epcot on the actual 30th anniversary. They had a retro theme park map, and large 30th anniversary buttons. My sister even stuck an extra one in her purse so she’d make sure I’d get one for my collection. That’s what makes her so awesome. That morning, my heart was racing, as we looked around. I felt so much excitement seeing all of the other Disney/Epcot enthusiasts, and I felt like I was really part of something special.

Of course, never one to miss a sales opportunity, Disney had specially created Epcot 30th anniversary pins. I dragged my poor sister into a line that lasted OVER THREE HOURS just to get to a cashier and purchase the 8 pins below. (5 years later I found the 35th anniversary to add to the collection.) To many, they are just pins. Plastic and metal decorations. To me, they are so much more. They signify experiences, special dates in my memory, and they also serve as a badge of honor. I’m proud to have an “I was there” pin for that special day.

My collection has grown to so many sub-categories of Disney pins. I have them proudly displayed in my home on 2 large bulletin boards as artwork. How Jim puts up with me, I’ll never know.;)

Here are some more of my favorites:

Do you collect Disney pins? Do you have any favorites? I’d love to hear about them!

One thought on “Disney Pins”